Whom to Blame for the Storming of the Barricades at Bersih 3.0

Wah my facebook note got damn a lot of shares :’) /happy

So woohoo Bersih 3.0 was a family affair. All of us were tear-gassed. I am writing this three days after the day of and my sinuses are still clear. Mashaallah. I know what to do next time I get a flu.

So everyone has written about how Bersih 3.0 was a life-changing experience lah. Uncles and aunties writing about how they wanted to redeem themselves for their inaction over the last few decades lah. This lah that lah. Everybody is an activist now lah.

My article will be different for two reasons:

1. People at Bersih 3.0 had no idea who was saying what 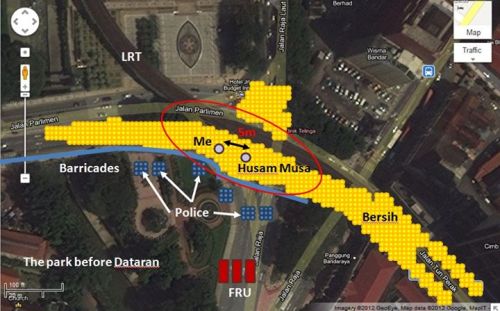 This is a map of the crowd at Dataran Merdeka that day. Bersih supporters are in yellow; the police and their barricades are in blue; the FRU is in red.

Look especially at the center of the picture. I was front and center with some friends. We were probably 2 to 3 meters from the Dataran barricades (with a few rows of people between us and the barricades). We were also 5 meters away from some speakers — Husam Musa (PAS VP), Mahfuz Omar (PAS VP), Wong Chin Huat (political scientist), etc. They were giving speeches on a scrawny mike and a speaker-thing. When the pathetic 30cm-by-30cm speaker (the audio device, not the person) was turned towards us, we could barely make out what they were saying. When the speaker was turned towards the crowd at Jalan Raja Laut under the LRT tracks, we had no idea what the fuck anyone was saying.

Photo from Carol Yong. Husam has gained a bit of weight, but I guess it would be factually and politically incorrect to say he has a beer belly 😉

So the point is this: at a 100,000-strong rally, especially one with quite a shit sound system, no one knows what is going on. Everyone is just chillaxing and watching everyone else. Most people cannot hear the speaker.

2. Which means that we could not hear what Azmin/Anwar said

And by we I mean all the sitters-in who were 20 to 30 meters away from them or more. So we could see them but not hear them. Serious. That is unless my hearing is cacat lah. 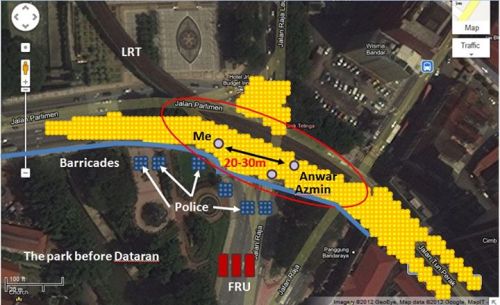 So basically I think people who write about Bersih 3.0 give too much influence to what speakers say or do not say. Ambiga gave instructions to disperse? Can’t hear you. (Another source) Anwar and Azmin inciting people to buka Dataran? Didn’t hear a word. Of course we heard some people in the crowd chanting masuk! masuk! but everyone just took it as a big fat joke haha so funny.

This argument, of course, does not extend to whether or not Anwar and Azmin successfully? incited the guys near them (link). But seriously, no one heard anything.

3. The police ran away. Really? Really.

So when the crowd cannot hear anything, right, the crowd makes its decisions on what it sees. When some people chanted masuk! masuk! no one saw anything. Then apparently a few PKR idiots/SBs/agents provocateurs decided to storm the barricades. And our brave men in blue ran away. This we saw.

No seriously. It was just like three guys who decide the open the barricade. And instead of stopping the idiots/securing the premises, our police do nothing. We had 20?ish policemen guarding the same exact place just an hour ago and now they all chicken out bokbokbok? And so our guys just chill only and walk in lah. (link; check out the guy with the perut besar).

Like that my mother also can storm barricades lah.

Giving credence to these speculations is the fact that there were barbed/razor wires running along the entire perimeter of the barricades except that particular portion. Jengjengjeng.

Look at this other guy just chill only destroying the razor wire. The photo rightly asks — if the cops had time to take these pictures, why didn’t they just rush in and arrest him?

Which of course gives support to the speculation that yep these guys were agent provocateurs who gave the police cause for action. Agents provocateurs or PKR idiots, you guys are all fuckers.

So again the larger crowd is just watching as people roar and some people surge forward. No one really knows what the fuck is causing the commotion and what the fuck they should do. When this happens the people will look to someone for leadership and direction. Anwar and Azmin are nowhere to be seen — maybe they were “negotiating” with the police.

So I look up and I see Chegubard on the car/4-wheel drive/thing. Guess what he’s doing.

Yes. The fucker — who is the only thing the crowd/I can see on the top of a car — directs us to storm Dataran. It is, in my opinion, the single most explicitly and directly irresponsible thing done that day. More people surge forward. Chegubard gestures repeatedly towards Dataran. This is the guy who almost beat Khairy in Rembau — can you believe it?

This isn’t like the Anwar/Azmin thing where one can debate what their hand signals really meant. This is an open and shut case. The fucker directed more protesters to breach the barricades. The fucker fucking gave the police cause to gas the 15,000?-strong crowd in front of DBKL. The fucker must die.

See even Marina Mahathir’s daughter writes that she couldn’t hear Ambiga when she gave her speech in Masjid Jamek saying that the rally was a success and that the crowd should disperse. (source)

This is basically what I think the Bersih 3.0 organizers really lacked this time around lah.

Imagine Ambiga waving a yellow flag or something on the car. Or doing a farewell dance. Or holding a banner while she stands on top of a car/is carried by another person. Message received. 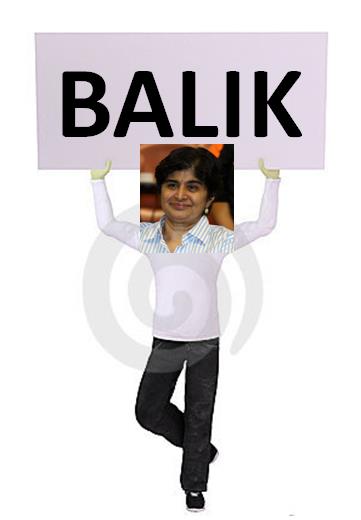 6. The idiot who jammed our telecommunications should be jailed

So apparently there was an idiot who decided to jam our cell phones and shit. 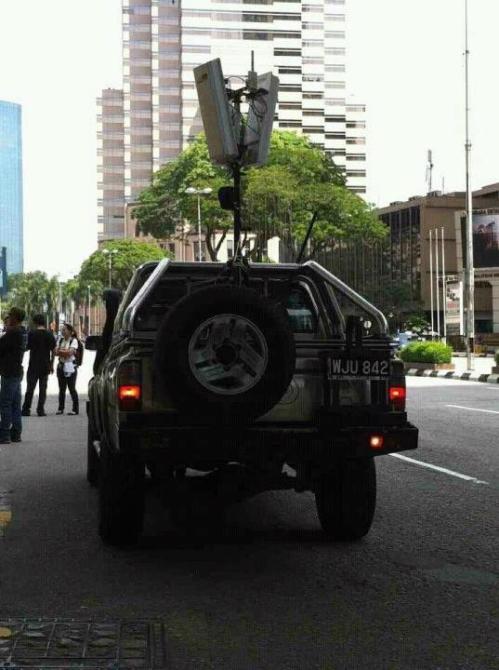 There were many reports about horrible coverage in the Bersih area while our phones displayed very high levels of reception. Smarty pants. If everyone was able to receive text messages/calls/tweets/facebook updates that told them that yo the rally’s over go back home — I bet you five bucks that much much fewer people would’ve been tear gassed, if at all. Everybody would’ve been on their way home. This idiot is equally responsible for the fiasco — I think I am justified in demanding blood.

So in conclusion I think quite a lot of what happened at the barricades can be party attributed to faulty communications, and both sides must take at least some of the blame. If the barricades were stormed by agents provocateurs, however, then I guess better communications would have definitely alleviated but not necessarily avoided the tear gas and water cannons lah.

I think Najib has been betrayed (yet again). Musuh dalam selimut ^^

Why ah? Two reasons, based on his interest. What does Najib really want?

The tear gas and shit during Bersih 3.0 in no way serves his interests.

Then how come the police still reacted with unnecessary force? Dunno leh ^^

But then again, while I attribute this argument to ill-will from within, I cannot discount the possibility that all this is just one big fuck up because people are stupid. Malice or incompetence? That is for you to decide, and for Najib to worry over.

One response to “Whom to Blame for the Storming of the Barricades at Bersih 3.0”